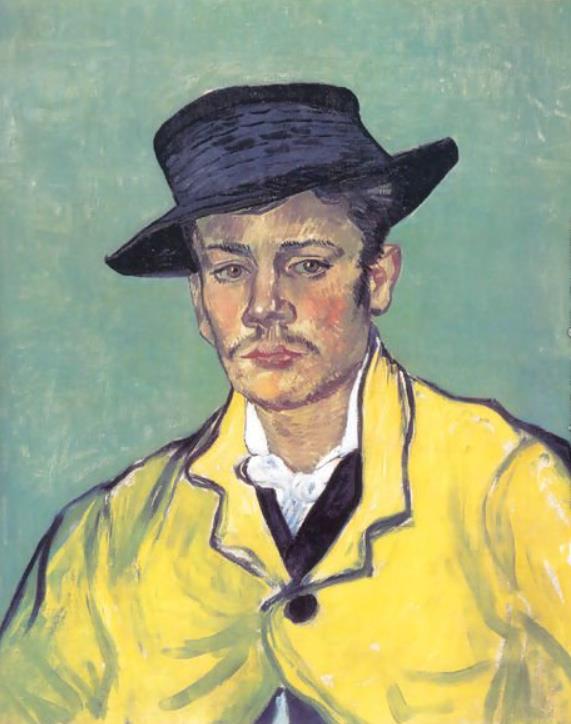 One of the best artists of all time, Vincent van Gogh is known for his creative paintings like “Starry Night.”

Vincent van Gogh, a Post-Impressionist painter, left a lasting impression on 20th-century art with his paintings, which are known for their elegance, emotions, and color. But unfortunately, he struggled with mental illness his whole career, grew up in poverty, and was largely ignored.

Vincent van Gogh created The Roulin Family series, a collection of portraits of the Joseph Roulin family, Arles, from 1888 to 1889. This series is one-of-a-kind. Van Gogh enjoyed painting portraits but had difficulty finding models. During his time in Arles, Mr. Joseph Roulin became a close, dependable, and encouraging companion to Van Gogh. It was crucial to him to stand in for a man he admired.

Van Gogh employed his ideas, colors, and topics artfully and creatively to elicit the right feelings from the viewer rather than creating works similar to photographs. The following is the famous van Gogh paintings list of the Roilin family.

Joseph Roulin, from Lambesc, was born in April 1841. On August 31, 1868, Joseph married Augustine-Alix Pellicot, also a native of Lambesc. Van Gogh made his portrait paintings when Joseph was 47 years old. Joseph was an entrepreneur. After meeting, Van Gogh and Joseph Roulin became friends and frequent drinking partners.

The Joseph portrait was the first in the list of Vincent van Gogh paintings, and his collection had about twenty portraits. Even though Roulin wasn’t the most charming man, van Gogh frequently related him to Socrates because of his kindness, high intelligence, trustworthiness, and so full of heart. In addition, Roulin resembled Russian author Fyodor Dostoyevsky precisely in terms of looks, having the same broad brow, wide nose, and form of a mustache.

Roulin supported van Gogh throughout and after his stint in the Arles asylum, and he communicated with Van’s brother Theo after the artist’s falling out with Gauguin. Roulin was with van Gogh through both happy and bad times.

Augustine posed for a portrait by Paul Gauguin, and Van Gogh shared housing with Joseph in a studio. She maintained her focus on Gauguin throughout the session. But, according to Augustine’s daughter, she did not feel at ease around van Gogh.

She took a seat in the home’s corner for dinner. The emerging paintings were distinctive. Gauguin’s image used the latest painting, Blue Trees, as the background. In contrast to Gauguin’s picture, Vincent van Gogh’s artwork looked densely and rapidly painted. However, the portraits remain some of the most famous Vincent van Gogh artwork.

Armand Roulin was the eldest son in the Roulin family; he was born in Lambesc, on May 5, 1871. Van Gogh painted him in 1888 when Armand was only 17 years old. In his artworks, Van Gogh portrayed an unhappy teenage boy who had just left his father’s house to become an apprentice smith.

Armand’s portraits are shown in the Museum Folkwang piece wearing what is perhaps his most perfect outfit: a chic fedora, a black waistcoat, a vibrant yellow overcoat, and a tie. Armand comes out as a little melancholy or possibly bored from sitting. However, his body fills the frame, conveying the idea that he is a strong, manly young guy.

The second Vincent van Gogh drawing describes what looks to be a gloomy young person with his torso partially turned away and his gaze downward. Even his hat’s tilt appears to convey grief. Both museum pieces were created on a 65 × 54 cm-sized canvas.

Armand Roulin plays the lead role in the film Loving Vincent, inspired by the life of painter van Gogh. In it, Joseph, Amand’s father, asks him to carry a letter to Theo van Gogh, Vincent’s brother. The highly lauded movie used oil artists who had had training in the arts, including van Gogh.

Each film pixel featured one of their works and stills from actual van Gogh works and character customization for Armand Roulin based on another artist’s works. Many of Gogh’s portrait pieces, including the 1888 Armand Roulin portrait, inspired the characters depicted in the film.

Camille, born on July 10, 1877, in Lambesc, southern France, was the middle child of the Roulin family. Camille’s series made it to the van Gogh paintings list, although it was unlikely considering his age. At the time of the painting of his picture, Camille was eleven years old. The Camille portrait at the Van Gogh Museum depicts Camille’s shoulders and head.

Cap Camille is The Schoolboy in Uniform in the portrait, gazing off into space. His jaw is gaping open, probably lost in thought, and his arm is slung over the back of his seat. Of the two Camille-inspired artworks, the portrait was the best.

When Van Gogh painted Marcelle, the youngest Roulin’s children, she was just four months old. Marcelle was sketched twice on her mom’s lap and thrice by herself. She Marcelle is depicted in all three pieces with the same shoulder and head viewpoint, plump cheeks, and arms on a green backdrop.

Marcelle’s Vincent van Gogh drawings inspired Johanna van Gogh, who was expectant then, to write, “I like to dream that ours will come just as powerful, just as lovely – and that its uncle will paint its portrait someday.”

Vincent Van Gogh is one of the best post-impressionists, and we honor him today. His works are admired for their natural beauty, vibrant hues, and honesty. The most well-known Van Gogh works are currently valued in the tens of millions of dollars.

This is a significant irony. Gogh felt worthless throughout his life. He had one painting sold, and critics called it “rubbish.” He passed away indigent.

Van Gogh was the most famous painter of his generation. His paintings had a significant impact on 20th-century art. Almost anyone knew Vincent van Gogh during his lifetime; his fame came after his death.

Robert Eggers on ‘The Northman’: Directing Is an ‘Insane’ Job

The Science of Appearance Men’s Fashion Grooming and Lifestyle

How Many Jobs are Available in Public Utilities?