In a country where brands play a big part in business, a vehicle is not identified by its name at first glance, but by the logo atop its metal parts made in the Philippines. These logos do not come about in a single second nor is it hastily designed, but each one is carefully thought of and drawn. They must be identifiable by just one look and must have some sort of depth behind them. On that note, let’s learn how these symbols came about and why were they chosen by their manufacturers.

Simple does it for the Volkswagen. The third biggest car manufacturer proves a logo need not be complicate with its simple blue and white design. Since 1939 it has undergone several changes, but one thing is constant: the interlocking V and W of the company’s initials. There is no sure origin of the logo; some say it was Franz Xaver Reimspiess who designed it while others claim it was Martin Freyer, who won in a logo design contest.

Aside from the signature V and W, today’s logo is also comprise of a circle surrounding the two letters. The line weight and the spaces inside the circle maintain the precise amount of “air” to symbolize legibility, creativity and effectiveness. The white in the logo means nobility, charm and purity while the blue signifies class, reliability and excellence.

The trio of diamonds in the Mitsubishi logo has nothing to do with gems, jewelry, or gambling. The story behind the logo can be found in the back-story of the company’s founder and the meaning of the company’s name. Originally a shipping firm, “Mitsubishi” was founded by Yataro Iwasaki and is a combination of the Japanese words “Mitsu” and “Hishi”, which becomes “Bishi” due to Rendaki or sequential voicing of the Japanese. The former means three while the latter means water chestnuts. The logo is reminiscent of the three oak leave family crest of the founder’s first boss, the Yamauchi clan. In addition, it is also suggestive of the three stack rhombuses of the Iwasaki’s family crest.

Animals are a popular theme when it comes to car logos and the Ferrari is no exception. This Italian sports car maker is not just synonymous to great cars. But to one of the best Formula One teams ever. With the most constructor championships under its belt at 16 and the most winning drivers at 15. Maybe it all has something to do with its prancing horse logo. 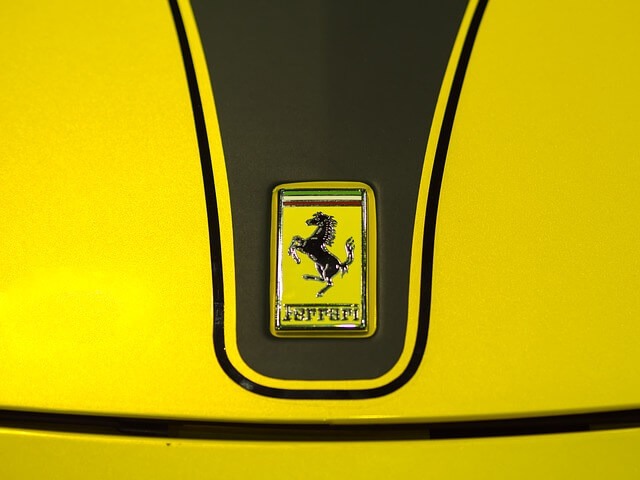 The company may have been found in 1939, but the history of its iconic horse dates back 13 years ago to 1923. That year, its founder, Enzo Ferrari, met the Countess Paolina after winning a race at the Savio track in Ravenna. Her son, Count Francesco Baracca, was an ace of the Italian Air Force and a World War I national hero. Who has perish after being hit by ground fire in 1918. In honour of his regimen and his love of horses. He used a black, prancing horse as his symbol. And had it painted on the side of the planes he flew.

His mother requested Enzo to use the horse as his emblem as it will bring him good luck. He modified it by placing it against a yellow background. The color of his hometown, Modena, along with the Italian national colors of green, white and red on top in three stripes. And luck the horse did bring Signore Enzo. Today, the name “Ferrari” is identify as one of the best when it comes to luxury cars with speed. If you say you have a Ferrari, there is no doubt of it being one of the best cars in the world.

Also Read: 10 Shocking Facts about Taxis around the World

Car models come and go, but the one thing that will remain is their manufacturer. Whether the company is now defunct or not, their legacy will live on in the story behind their symbol.

5 Reasons Video Marketing is The Most Effective Landscape